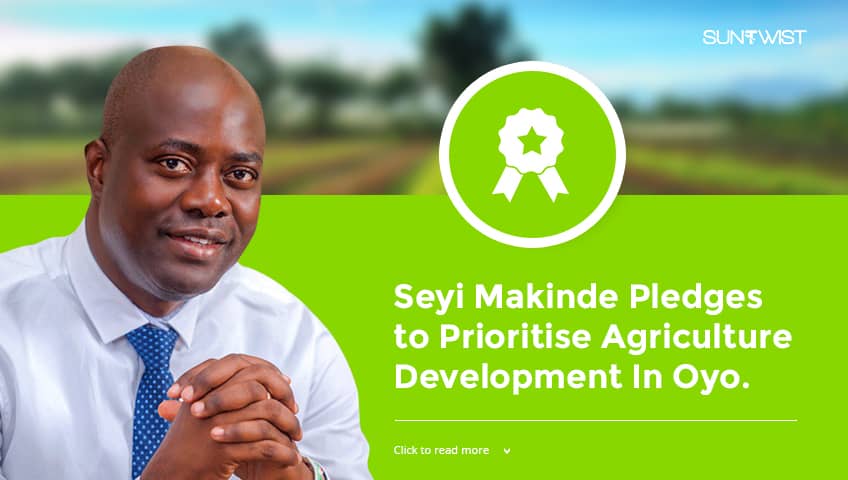 OYO State Governor, Oluseyi Makinde has pledged to give agricultural development priority attention during his tenure as the Governor of the state.
He gave this assurance during the opening ceremony of a two-day workshop on human resource development of rural farmers through innovative information technology at the International Institute of Tropical Agriculture (IITA), Ibadan.
The two-day workshop organised by Dr. Lilian Otaye-Ebede and Dr. Olatunde Durowoju on behalf of Liverpool John Moores University (LJMU) forms part of the remit of the Global Challenge Research Fund (GCRF) to tackle the challenges being faced by developing countries.
One of the key themes that emerged from deliberations in the workshop was a need to urgently assess extension services through public and/or private partnerships in order to ameliorate the lack of funds and capacity that have plagued that sector of the value chain.
Another important theme that emerged was the need to have pressure groups/lobbyists from different stakeholder committees that will advocate for investment in agricultural support services both from public and private establishments. More importantly, the stakeholders felt the context of the farmers should be considered when designing and disseminating new technologies. Therefore, farmers should be engaged from the idea generation phase all through to the prototype testing phase.
Makinde who declared the workshop open, said he was surprised at the level of poverty of people in the rural areas of Oyo State during his campaign before his election.
He wondered what had happened to the extension systems of transferring improved technologies to farmers in rural areas of the State. He promised to pay serious attention to the plight of rural farmers “because without food security no country can claim to be totally independent,” he said.
Presenting a paper on the occasion, the Governor who was full of enthusiasm to be involved in finding solutions to information barriers between Extension Agents and farmers said agricultural information generation and dissemination were necessary for the development of agriculture.
“The obvious manpower and infrastructural needs of the Extension Services Department of our Ministry of Agriculture shall be addressed with utmost urgency. Poor rural roads, power and water supply are issues that shall be addressed equally and simultaneously if we want free flow of information dissemination in rural agriculture,” the Governor emphasised.

The Director for West Africa at IITA, Dr Robert Asiedu, pledged the commitment of IITA to work with the state and Liverpool John Moores University to help improve agriculture and the livelihoods of farmers in the state in particular, and Nigeria in general.
He explained that as an institution, IITA had set for itself the goal of taking “11 million people out of poverty and reclaiming 7.5 million hectares of degraded land,” and that to achieve that goal required partnership with state and non-state actors.
Makinde concluded that there must be a regular forum for the town and the gown to meet under his administration to bring the benefits of agricultural research institutes, universities and all other agro-allied institutions in Oyo State to bear on the farmers to help solve the problems of food insecurity.

Financial freedom: A way to control your finances

LEGUMES Legumes are filled with nutrients that are easy to find in stores, inexpensive, and can be used in different dishes. If you are trying to cut down on your meat intake you should take legumes because they are also filled with protein. Legume is a way of adding plant-based protein to your diet. Most […]