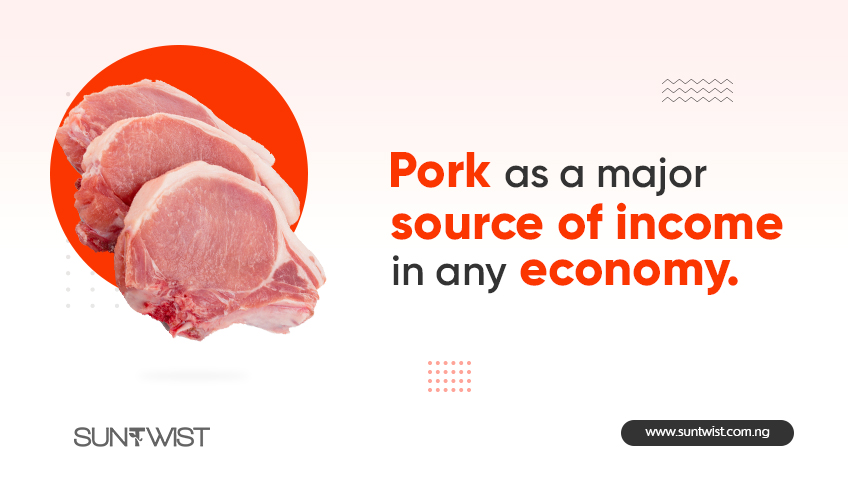 Pork is the culinary name or the meat of a domestic pig (Sus scrofa domesticus). It is the most commonly consumed meat worldwide, with evidence of pig husbandry dating back to 5000 BC. Pork is eaten both freshly cooked and preserved. Curing extends the shelf life of the pork products (Ham, smoked pork, gammon, bacon, and sausage are examples of preserved pork).

Charcuterie is the branch of cooking devoted to prepared meat products, mainly from pork. It’s the most commonly consumed red meat worldwide, especially in eastern Asia, but its consumption is forbidden in certain religions, such as Islam and Judaism. For this reason, pork is illegal in many Islamic countries.

Being high in protein and rich in many vitamins and minerals, lean pork can be an excellent addition to a healthy diet. When dry, the protein content of lean pork can be as high as 89% making it one of the richest dietary sources of protein. It contains all nine essential amino acids necessary for your body’s growth and maintenance. In fact, meat is one of the most complete dietary sources of protein.

For this reason, eating pork or other types of meat may be particularly beneficial for bodybuilders, recovering athletes, people post-surgery, or others who need to build up or repair muscles. Pork is also an excellent source of many vitamins and minerals, including thiamine, zinc, vitamin B12, vitamin B6, niacin, phosphorus, and iron.

WHAT PORK CAN BE PROCESSED INTO

Several valuable products are gotten from swine. Some of these include insulin which is needed for the regulation of diabetes, valves for heart surgery, suede for shoes and clothing. Lard is fat from pig abdomens and is used in shaving creams, soaps, make-up, baked goods, and other foods.

In Nigeria, the rate of Pork consumption increased due to the relative ease of raising pigs when compared to other animals. There is a growing interest in pig farming in Nigeria and other African nations.

The following stages are involved in the processing of Pork;

In addition to the equipment used, factors such as the scalding time, scalding temperature, breed of pig, and seasonal influences can all affect the result gotten from this process.

Bacon comes from pigs it’s a type of Salt-cured pork made from various cuts, typically from the pork belly or from the less fatty back cuts. It is eaten on its own, as a side dish, or used as a minor ingredient to flavor dishes

Ham is pork from a leg cut that has been preserved by wet or dry curing with or without smoking. As processed meat, the term “ham” includes both whole cuts of meat and ones that have been mechanically formed. Ham is made by soaking cut-up meat in a vat of brine.

Pork can be processed into a wide range of products using different pork processing equipment. The Pork Processing Equipment are;

Ever heard of Lard? Don’t rack your brain thinking what it is, we’ve got you. What Is Lard? Lard is a semi-solid white fat product obtained by rendering the fatty tissue of the pig with no trans-fat and a high value of fatty acid in it. It is a source of linoleic acid, which is an important fat for our body’s inflammatory response, […]

Choline, choline, choline… What are you? We are sure you have lots of questions flowing in your head. This article will give you what you need to know about it. Choline is an essential nutrient that is naturally present in some foods and available as a dietary supplement. This is a newly discovered nutrient, although […]